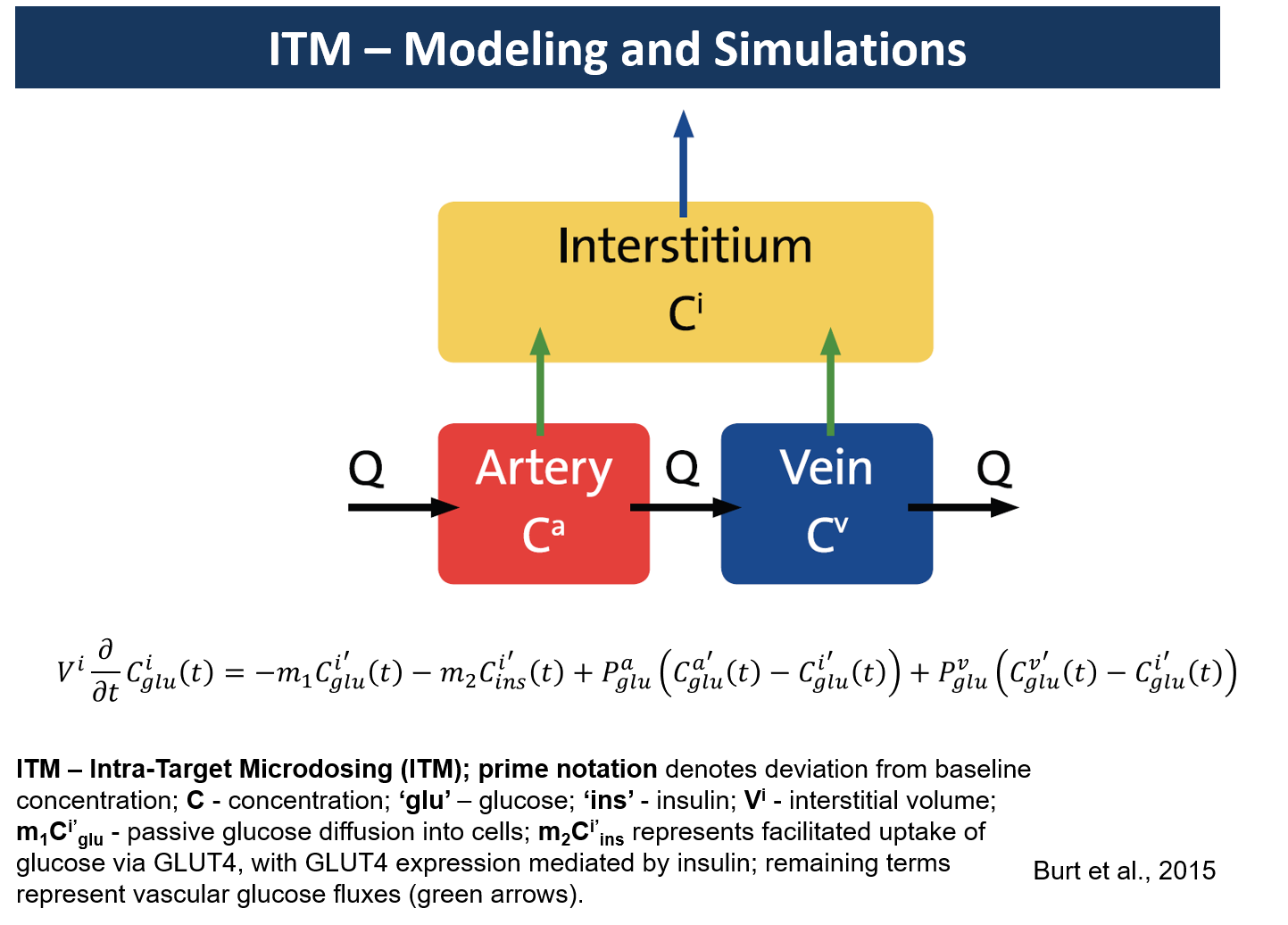 Early-Phase development refers to the first stages of testing of novel drugs in humans. It includes Phase-0, Phase-1, and Phase-2 of clinical development. These studies include first-in-human (FIH) and first-in-patient studies. Phase-0, including microdosing studies, are known as Exploratory Investigational New Drug (eIND), and Exploratory Clinical Trials, these approaches to FIH studies offer considerable methodological and operational flexibility and advantages over traditional approaches. The Burt Consultancy portfolio includes several Phase-0/Microdosing programs and developmental scenarios. One such approach, Intra-Target Microdosing (ITM) was developed by Dr. Burt. ITM facilitates the capture of pharmacodynamic (PD) data and the extrapolation of microdose to therapeutic-level exposures. For more on Phase-0/Microdosing see our recent publication: https://rdcu.be/b61rf

Intra-Target Microdosing (ITM) administers a microdose locally into an area about 1/100th or less of the total body mass. Since microdose is 1/100th or less of the minimal therapeutic-level dose, the exposure in the target will be in the therapeutic range. Such exposure will be short, ranging from seconds to minutes, depending on perfusion parameters. However, it could allow the collection of important biomarkers or surrogate endpoints.

Such data could be critical to the assessment of the mechanism of action (MOA). This can be especially useful if done in patients at the first in human (FIH) study. Regulators have encouraged the use of microdosing in patients at the FIH stage (ICH M3 Section 7). The following are examples of developmental scenarios where ITM application would lead to considerable advantages over traditional approaches (from Burt et al. 2016):

Localized administration of an NMBD into the radial artery would have effects on hand muscles within seconds to minutes (1,2). Reduction in muscle strength, measured as percent ‘twitch response’, serves as the biomarker associated with drug efficacy. The electrical stimulus is applied to the proximal ulnar nerve to induce a depolarization with the subsequent release of acetylcholine (Ach) at the neuromuscular junction. The resulting contraction of the adductor pollicis muscle is the ‘twitch response’. This response is calibrated as a full twitch (100%). When the NMBD is administered, the reduction of the twitch can be graded (0 - 100%) where 0% represents full neuromuscular blockade. The PD action of the drug (onset, duration of the blockade and offset) can then be recorded in terms of % twitch.

This approach represents a considerable advantage over the current NMBD development process whereby a dose is administered systemically with resultant complete muscle paralysis requiring full ventilatory support. In addition, systemic NMBD studies are conducted under general anesthesia to avoid the extreme anxiety-provoking experience of complete paralysis. The utility of ITM would be the ability to administer NMBD peripherally to a circumscribed target for the purpose of studying its effects while sparing the rest of the body unnecessary exposure and expensive procedures. Furthermore, the reversal of the NMBD residual muscular block is of clinical importance and could also be studied in a safe and controlled manner using ITM in the early clinical development of NMBDs (3,4). This could prove of particular value in vulnerable populations such as children and the elderly (5,6).

SGLT-2 inhibitors and glucose excretion in the kidney

A chemotherapeutic agent for hepatocellular carcinoma is administered into the hepatic artery (10). The drug or a biomarker (e.g., FDG) is radiolabelled. Demonstration of binding to tumor tissue through PET-imaging will be proof-of-concept that the chemotherapeutic agent reaches, penetrates, and binds to cellular targets (11). Displacement studies could confirm binding to a target of interest by administering competitive agonists or antagonists (12). Chemical biomarkers could be obtained in the downstream vein. If done during surgery, blood samples could be more easily obtained, and tissue samples of the tumor could be obtained for histological markers of therapeutic or toxic effects. Since the concentration returning to the systemic circulation becomes a microdose the traditional microdose study where systemic PK and binding to extra-hepatic tissues can be studied as well. Dynamic PET-imaging obtained to show concentrations over time could help study intra-tumour PK, systemic microdose PK, and together with the chemical data could be used to scale results to the whole-body full-pharmacological exposure (13).

The Burden of the 'False-Negatives' in Clinical Development: Analyses of Current and Alternative Scenarios and Corrective Measures. Clin Transl Sci (2017), 1–10; PMID: 28675646

The first comprehensive analysis of the impact of under-powered early-phase studies on the productivity of drug development. Suggested intervention targeting strategic allocation of resources and related study design features are discussed.

This is the first human study using the ITM methodology. The study demonstrated the proof-of-concept and feasibility of ITM. After administering insulin microdose into the radial artery the ipsilateral hand received therapeutic level exposure. This exposure allowed the detection of biomarkers relevant to insulin action. At the same time, the rest of the body, including the contralateral hand, received microdose exposures. This allowed modeling of the microdose-to-therapeutic-level range of exposures in the same individual.

This is the ITM concept manuscript describing the range of applications and modeling support.

This article is a practical guide to Phase-0 approaches. It emphasizes the importance of initiating planning in advance (1.5.-2 years prior to IND) in order to make full use of the potential of these approaches. It also includes the first economic analysis on the impact of microdosing on the patent life of back-up compounds.

This article is a review of the applications and methodologies available with Phase-0/Microdosing approaches.

This is the first ITM POC study in animals. Insulin was administered locally at microdose to generate therapeutic level exposures. 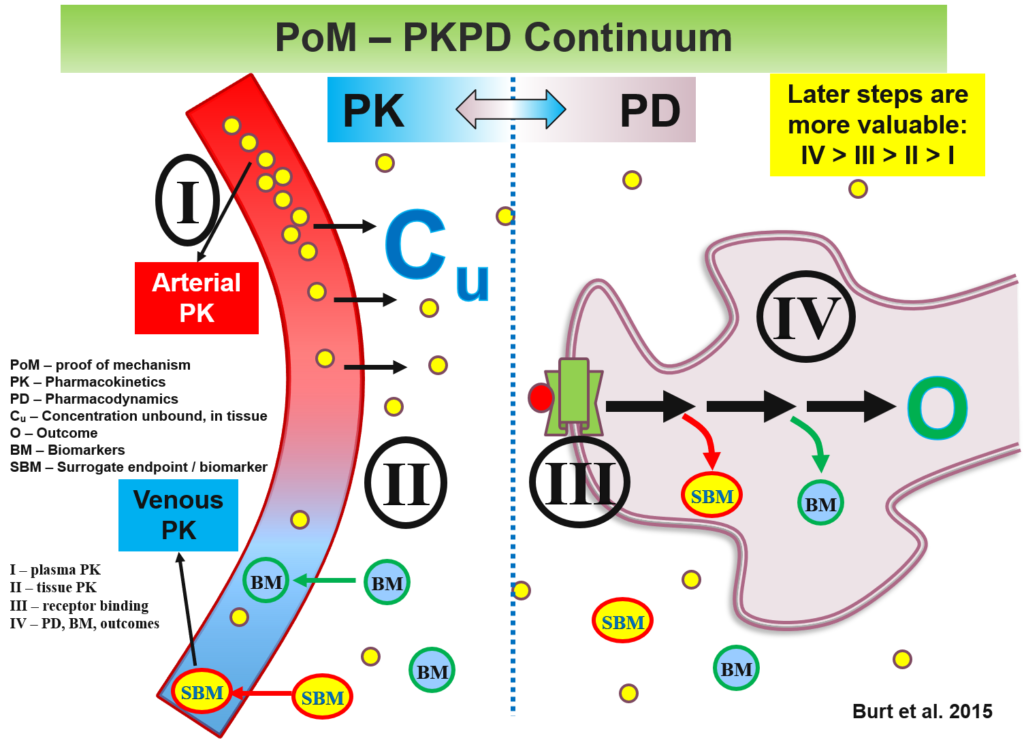 The Burt Consultancy portfolio is a testament to the challenging complexity and multidisciplinary nature of modern drug development. This is especially true at the proof-of-concept (POC) stages (Phase-0/1/2). At these stages, the studies are small, short, and hence often under-powered. To be successful, developmental programs need to incorporate cutting-edge input from a range of disciplines including regulatory sciences, ethics, economics, imaging, machine learning.

This is in addition to obvious disciplines such as clinical pharmacology and statistics. Even the latter ones nowadays include innovations and sub-specializations such as population PK, PBPK modeling and simulations, Bayesian statistics and adaptive designs. These advances need to be considered to maximize signal detection and ensure competitive advantage. To further complicate matters, each test article comes with its unique characteristics, associated tissue and chemical targets, and relevant therapeutic areas. The combination of these factors is unlikely to have a legacy or precedent to readily replicate or learn from.

The under-powered nature of POC studies can be partially addressed using signal-enhancing approaches. For example, the use of biomarkers as surrogate endpoints is particularly valuable for providing precious first-in-human (FIH), and first-in-patient mechanism-of-action (MOA) data. Such use of ‘omics’ approaches (e.g., pharmacogenomics, pharmacometabolomics, pharmacoproteomics), imaging modalities, and advanced analytical methodologies, may allow sufficient variance reduction to compensate for the under-powered nature of POC studies permit arrival at informed developmental decisions.

The following are examples from Dr. Burt's publications and the Burt Consultancy portfolio that emphasize the above points: